More often than not, sectarian conflicts and sectarianism, in general, are presented as religion-driven and deeply theological phenomena. Those who agree with this view believe that it is a variable that cannot be removed from the Middle East equation. Even some of the world’s greatest leaders and political thinkers have incorporated this view, suggesting that the Shia-Sunni divide is one that is written in the DNA of Middle Easterners, something that cannot be distinguished from their identity. However, when we zoom out of this narrow and simplistic interpretation of the ongoing conflicts in the Middle East, we see that sectarianism is actually a reaction to 20th century political, economic and social problems that have remained unaddressed.

Sectarianism refers to “the construction and maintenance of boundaries between groups defined according to doctrinal, sociological, or identarian differences” (Williamson, 2021). Most of the time, this refers to religious doctrinal or cultural identity differences. The Sunni-Shia divide has emerged after the death of Prophet Muhammad in 632 AD. Soon after the Prophet’s death, his followers needed to name a successor and new leader. On the one hand, there were those who suggested that leadership should be awarded to a qualified individual, while others claimed that the only legitimate rulers that should replace Muhammad should come directly from his bloodline. This in turn created the Sunni and Shia Muslims respectively, whose beliefs have remained solid since then.

The schism in Islam, which has existed for 14 centuries already, does not do justice to all the political, economic, and geostrategic factors involved in the emergence of the region’s conflicts. Sunni and Shia Muslims have coexisted peacefully for centuries and in many countries, it is considered perfectly rational to marry people from the other sect at the same mosques. They have a shared faith in the Quran and the sayings of Prophet Muhammad, and they perform similar prayers, even though their rituals and their interpretations of Islamic Law differ.

The roots of the current perceptions of sectarianism can be traced to the 1979 Iranian revolution, which overthrew the Pahlavi dynasty, established a theocratic regime, and has come to represent political Islam better than any other regime in the region. Before the revolution, secular regimes were the most common type of regime across the region: from Egypt, with Gamal Abdel Nasser’s pan-Arabism, to Iraq under Saddam Hussein to Lebanon, religion did not constitute a key element of domestic or foreign politics and movements that strongly advocated for the role of political Islam were not able to gain much political power. Iran’s revolution brought to power mullahs and religious leaders who played a fundamental role in stirring sectarian tensions in the region in their efforts to differentiate themselves from other leaders and set out on a new political path.

However, sectarianism is reflected better than ever in the Iranian-Saudi tensions. These two big powers of the Middle East often clash along several frontiers, most notably foreign policy, and energy diplomacy, and the competition among them has defined the path that the region is pursuing. This struggle for regional supremacy has been crystallized between the Shia Iranians and the Sunni Saudis, but over the past years, other powers –namely Turkey– have tried to cast themselves as the true protectors and representatives of the Sunni Muslim world. Both Shia and Sunni Muslims have weaponized their religious differences for their own purposes i.e., using it to rally their constituency and boost their electoral performance.

Even though Iran seemingly retains the upper hand, other Sunni states and religious-based groups have stirred up violent extremism which, among other things, contributed to the rise of the Islamic State (ISIS). The rise of the Taliban and their successful takeover of power in Afghanistan suggests that we have not seen the end of the rise of Sunnis – the ceiling has not been reached, and their influence has not yet reached its peak. Politicized incorporation of religious law in domestic politics and the welcoming of less secular approaches to the settlement of political, economic, and social crises are two elements that have already set the region on a different path, away from secularization and towards more religious radicalization.

Israel offers another interesting perspective in the interpretation of sectarian politics. Its intervention in the side of Sunni powers and its recent re-thinking when it comes to regional alliances and bonds, suggests that the matter is far from a geographically defined one. Given Israel’s involvement in the regional conflicts, any solution that would not involve acknowledging Iran and its nuclear program is no longer possible: There are far too many interconnected interests and intertwined political approaches for the Syrian, Yemeni or Libyan crisis to be settled in means that would not address sectarian attitudes.

The Arab Spring encouraged political leaders to further weaponize Islam. The process towards more democratic openings, better government, and less corruption was perceived skeptically by many who were less willing to accept change. Those who feared that their positions in the leadership would be sacrificed in the name of democracy were also those who embraced sectarian principles to stand firm against changes. In Syria, Bashar Al-Assad stirred tensions between the Sunni and Shia communities to scare the Alawite community, which he is part of. In Bahrain and Yemen, violent regime crackdowns were directed at anyone suspected of being a Shia protester or Iranian proxy. What made it worse was the reorganization of Iran and the Saudis in their respective folds – they backed the groups that were more in line with their positions, they chose proxies who were advocating for the same objectives, and they chose to work with partners who approached matters from the same perspective. And despite all of Iran’s recent victories with reference to the development of its nuclear capabilities and its skilled diplomacy, the sectarian conflicts of the Middle East are far from over.

While the Trump administration succeeded in severely damaging the Iranian economy, increasing social unrest and discontent with the previous government, its efforts to entirely marginalize Iran in the Middle East failed. Instead, according to the New York Times and U.S. Congressional reports, Iran escalated tensions by attacking tankers in the Persian Gulf, targeting oil facilities in U.S.-ally Saudi Arabia ad launching missile strikes on Iraqi airbases housing U.S. troops. The current Iranian government, led by Ebrahim Raisi, and succeeding Hassan Rouhani, stripped itself of any sense of modesty and instead re-entered the international scene with more assertiveness and determination than ever before. Instead of stomping out a threat, the Americans stirred a sleeping giant and reminded the Arab world why Iranians still possess the upper hand in the foreign policy of the Middle East.

And even though Iran finds itself in a relatively favorable position, the stake of the Arab monarchies and other big players in the region have a lot to lose if things go sideways. In Syria, Assad is trying to re-establish his hold over the country, but sectarian tensions, religious interests, and international proxies all represent impediments in this process. In Iraq, the government’s victory against the Sunni jihadis only showcased how tied the leadership is to American and Iranian military support. In Yemen, the civil war is now becoming a proxy war, with the central government being backed by the Saudis and the Houthis enjoying military and logistic support from the Iranians.

Sectarianism has been considered a defining element in the formulation of the region’s perceptions. However, this has not always been the case. The historically peaceful coexistence of the Shia and the Sunnis only further highlights how much these religious differences have been politicized and instrumentalized by current governments. In their effort to differentiate themselves from all the previous governments that did not provide better economic outcomes, did not rid the country of corruption, and did not substantially improve social conditions. These governments strongly embraced political Islam and they saw in religion the way to ascend political in the international realm.

The Sunni-Shia religious divide is the superficial way to approach the fundamental challenges that states in the Middle East are facing. Attributing their differences simply to religious differences, which aren’t correctly interpreted, suggests that an easy solution can be found in the blink of an eye. However, if we are to properly address the conflicts in the region and attempt to resolve them, concrete and pragmatic solutions have to be drafted. In order to redefine a status quo, previous misconceptions have to be addressed – without this, solution formulation will just be a biased repletion of previous mistakes. 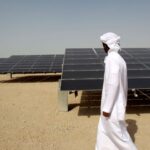 Previous Story
Dr.Marwan Muasher to MR:The pivot towards Renewable Sources of Energy in the Middle East
→

Next Story
Economy: What Wall Street analysts expect in the coming months

Green transition: a harsh reality or an idealized vision?

OPEC, the Saudis and the future of oil

The recent rift between the oil kings of Saudi Arabia and the United Arab Emirates (UAE) is an indication of the things that are coming...