Usually, when politicians are considered to have failed, it is time for some general to appear in television to announce that he has seized power for the good of the people. Such was the case in Myanmar’s latest coup, when the not so forgotten concept of military junta has just been revivified. When it comes to Italy, however, events unfold differently: instead of the usual sequence of events, when governments fail, former politicians who are still under the spotlight, preferably with a successful career in the European Central Bank behind them, suddenly pop back into sight. And this is just what happened with Mario Draghi.

On February 3rd Mr. Draghi appeared at the palace on the Quirinal hill to be asked by Sergio Matarella, Italy’s President, to be the head of a new government. Outgoing prime minister Giuseppe Conte’s resignation comes after weeks of tensions within Italy’s uneasy coalition government composed of the populist Five Star Movement (M5S), the center-left Democratic Party (PD) and Italia Viva, a smaller center-left party led by former prime minister Matteo Renzi. Criticisms for Conte’s management of the COVID-19 pandemic and the absence of a proper post-pandemic economic recovery plan prompted Renzi to withdraw his party’s support from the government, which cost 18 crucial votes in the Senate, without which it no longer has majority.

The government still has enough support in the Chamber of Deputies, the lower house of parliament, but given that all legislation has to be approved by both houses, these is no longer any guarantee that Conte’s coalition would be able to successfully pass any legislation. This was the setup for the Senate’s due vote on proposed judicial reforms, and if government’s proposals were defeated, it would have been an embarrassment for Conte and a clear sign that he no longer had things under control. Instead of sitting cross-handed, waiting for the inevitable to happen, Conte resigned in a strategic move, hoping that he can now form a new government with himself at the helm.

The announcement of Conte’s resignation and the possibility of a new Draghi-led government led markets to rejoice, with the Italian Stock Exchange leaping nearly 3% at the opening and the gap between Italian and German bonds shrinking by 8% to just over 100 basis points.

Italy is facing a difficult moment: not only is it still, slowly, and painfully going through the pandemic, but in March a ban of firings that is due to be lifted is bound to unleash a wave of job losses. By the end of April, the government has to decide how it will spend 200 billion euros in grants and loans from the EU’s recovery fund, with many member states silently wishing that Italy uses these funds in a clever way to reverse two decades of dismally low growth that has threatened the stability of the EU’s single currency. And who would be better to engage in this new, risky project than Italy’s own ‘Super Mario’, the man whose decisive action saved the euro in 2012?

The crisis that followed Conte’s resignation can also be seen as a triumph for Renzi, who indirectly brought down a coalition whose policies, including its plans for the allocation of the EU’s funds, he deplored since the very beginning. He unseated a popular prime minister who threatened to challenge him in the middle ground of politics. Surprisingly, both have been successfully achieved without elections, which undoubtedly would have crushed Renzi’s tiny party. While Italia Viva had enough seats in parliament to have been crucial to Conte’s majority, polls currently suggest that it has the support of less than 3% of the electorate. And while this was a personal victory for Renzi, the same cannot be said for Italy’s democracy – something is wrong in a country where a party as tiny as his can oust a government.

The alternative to Conte’s technocratic style of governance is a ballot box. But Mattarella firmly argued that the challenges currently facing Italy are too great and too urgent to allow for an early vote. In doing so, he exposed another flaw: Italy has also been experiencing a cumbersome and inefficient procedure when it comes to transferring power. Many will recall that it was because of this slow-moving mechanism that it had taken five months to install a new government in 2018 and four months in 2013.

And while Italy’s soon-to-be-announced prime minister may not be yet another technocrat, the common backbone of problems that he/she will face remains the same. Leaders have been brutally exposed to the turbulent Italian domestic politics and to the unpredictability of unforeseen international events, both of which have been toppled with foundational errors and accumulated political mismanagements. Mr. Draghi will have to endure, manage and deflect the domestic blows and international criticism that he will face in order to survive in a cabinet that is likely to be comprised of strong political forces.

The heaven-sent ascent of the man who saved EU’s common currency gave hope to Italians frustrated with a paralyzed coalition ridden with incompetence and ideological schisms. And now all eyes turn to Italy’s own ‘Super Mario’, in the hope that he will somehow be able to save what’s left.

Next Story
All Eyes On Africa: Ethiopia’s Tigray Conflict 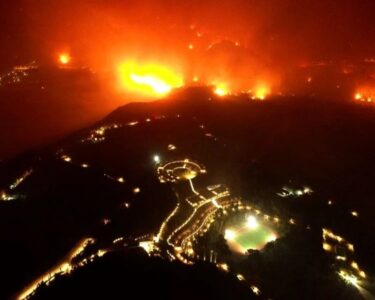 The Battle for the Middle East

Recent international developments have proven for yet another time that the established status quo is steadily crumbling. The story of...

In the past few months, Erdogan’s boisterous efforts to revivify the glory of the Ottoman Empire have dominated national and...